A few blueberry bushes or a small planting are common feature of backyard landscapes in the piedmont region of North Carolina. When planted on a suitable site, blueberry plants are easily managed with annual pruning and mulching. Pruning promotes larger, high-quality berries and healthy plants that are productive for multiple decades.

Why and what are the objectives of pruning?

The growth habit of blueberry is key to understanding why and how it is pruned. Blueberry (Vaccinium spp) is a multi-trunked, woody shrub with a perennial root system. The above-ground part of the plant (or canopy) produces shoots (or canes) of varying ages, and these canes lose their fruitfulness over time, after about three to five years. Aging out canes to be replaced with new growth to maintain the lifespan and productivity of the planting. Old wood has a greyish color and rough bark, while young, one to three-year-old wood, is reddish and has smoother bark. A well-maintained blueberry field has a reddish appearance in winter, due to the large quantity of new growth – young, healthy fruit-bearing wood.

The first aim of pruning is to remove old canes as they age out, thereby stimulating growth of new, replacement canes. Second, prune to thin the crop and prevent over cropping, common in many rabbiteye blueberry varieties. Third, pruning promotes light and air entry to the canopy, a cultural practice to control disease and to allow sunlight, and thus sugars, to reach ripening fruit for a sweeter harvest. Finally, proper pruning controls bush size for easier harvest. 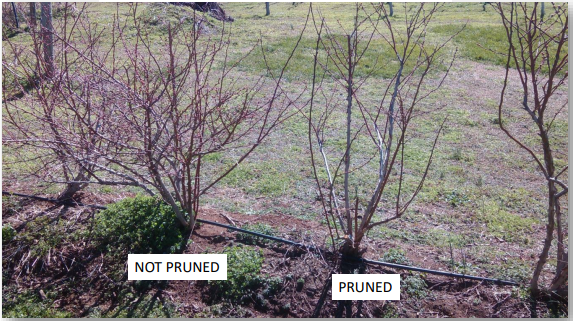 When is the best time to prune blueberry plants?

Dormant pruning on blueberries, caneberries, vines, and fruit trees is done in the dormant season, after the leaves fall but before buds begin to emerge in spring. Practically, it is easier to see where to make pruning cuts on a leafless plant. February to early March is the ideal time, after the coldest part of winter has passed because pruning temporarily reduces cold hardiness. Late winter is often more comfortable for the pruner as well. Prune on a dry and sunny day to reduce the risk of disease entry into open pruning wounds. Vigorous shoots may be pruned back in summer, but this should be done no later than July so that new growth has time to harden off before winter. 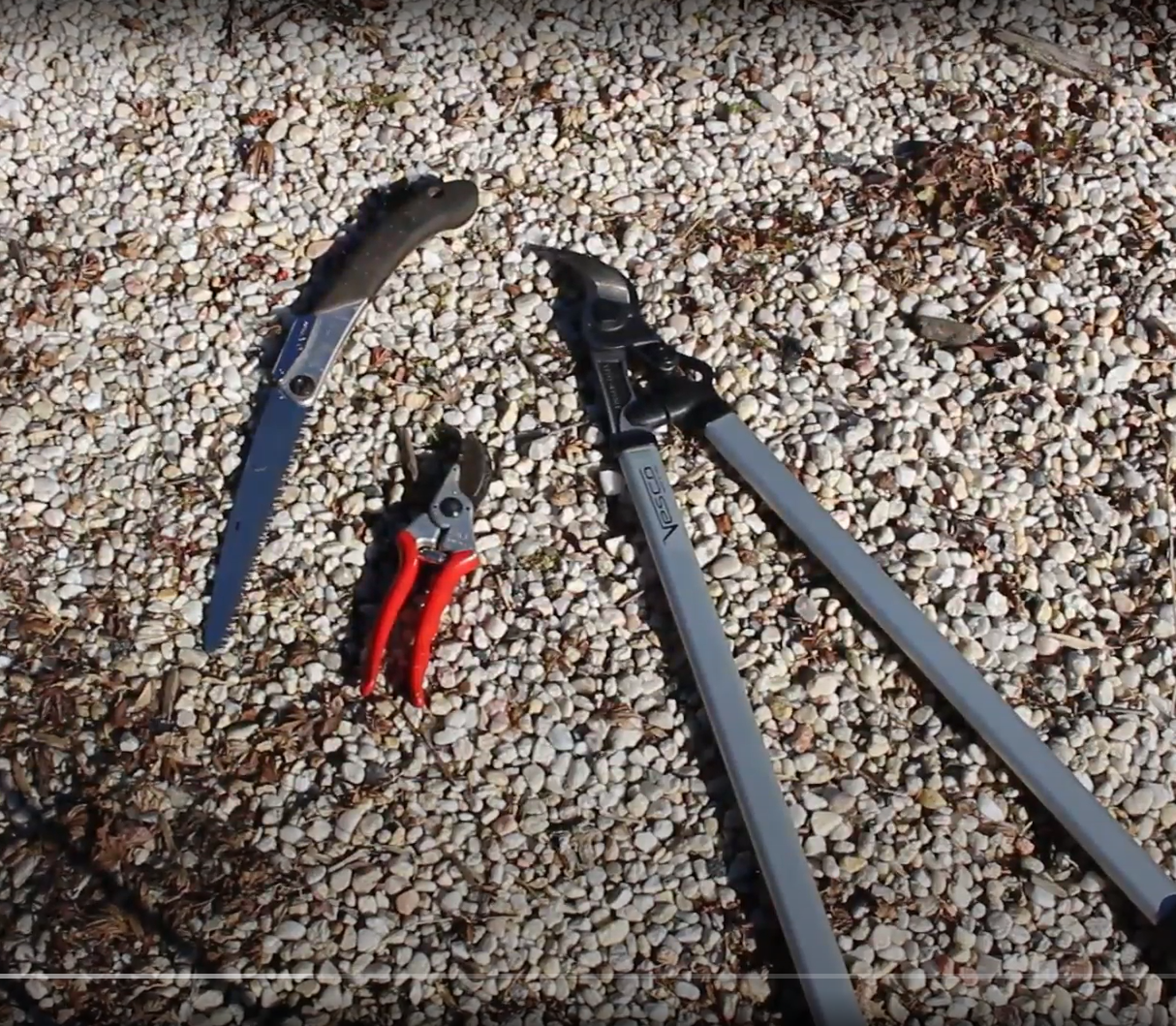 The tool with best utility is a pair of durable, long-handled loppers for making larger at-the-ground (or basal) cuts. Clean, sharp hand pruners are needed for detail pruning at the top part of the plant. Spray or wipe down your tools with sanitizer before and after pruning (or after cutting on a diseased plant). I use undiluted 70% isopropyl alcohol in a spray bottle to clean pruners, but a 10% bleach solution is also recommended. And don’t neglect a sturdy pair of gloves for hand protection. 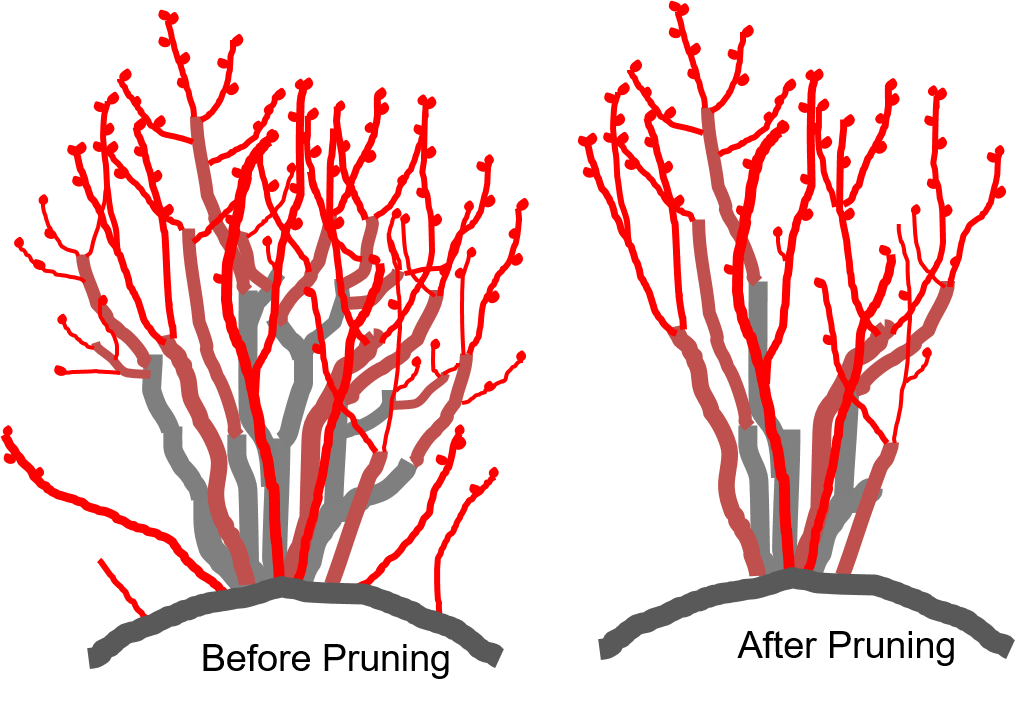 Cover your 3 “D”s – prune out dead, diseased, and damaged wood (the three Ds) often caused by physical breakage and cold injury. Damaged tissue is an entry point for cane blight and other diseases.

If you stop at this point, you will already have added healthy, productive years to the plant. Now, apply detail pruning to thin the flower buds and twiggy, old growth in the upper canopy. Using hand pruners… 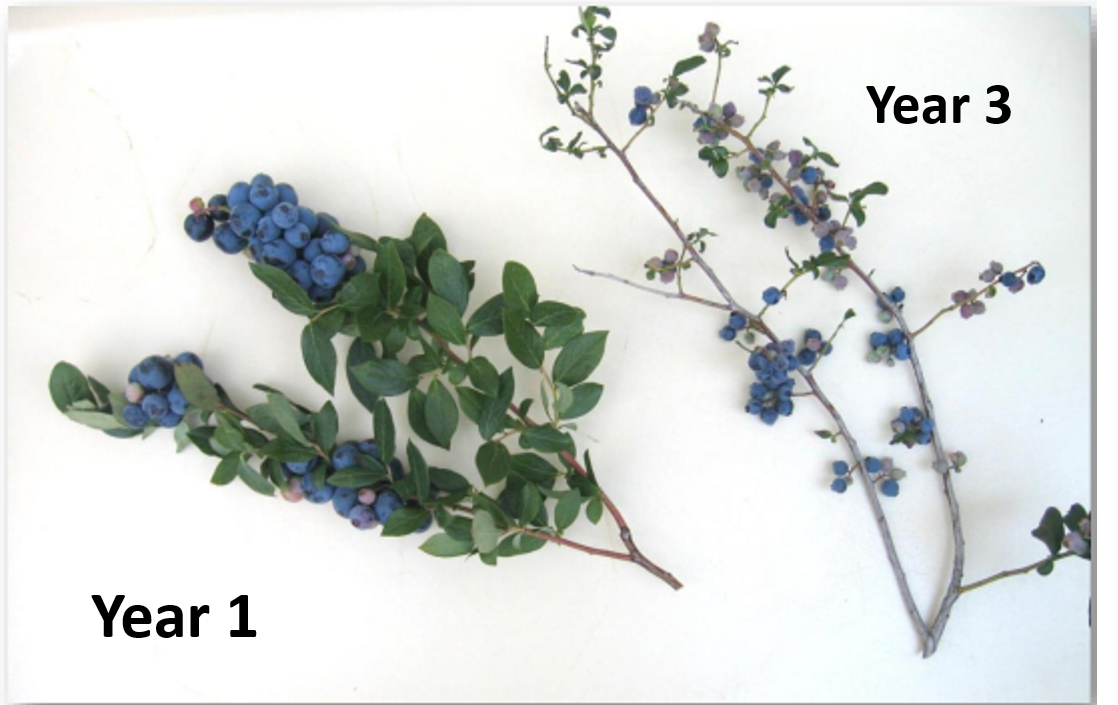 Following these steps, you should be removing 40-50% of the plant. Your bush may look frighteningly sparse, but you will be surprised by how much fruit is still produced this year.

Finally, properly dispose of or mulch cuttings within the row. Diseased and dead wood should be removed from the field because it can harbor diseases and insect pests. Clean wood can be laid in the row, and run over with a mower. This adds mulch around the plants and organic matter back into the soil. Note that these recommendations apply to pruning mature blueberry bushes, and differ for young plants in their first two years of growth or neglected plantings in need of rejuvenating.

For further pruning instruction, watch this blueberry pruning video where I show how to prune a blueberry plant from start to finish. Follow this Arkansas blueberry school series to learn the major management practices for blueberry production. Questions? Contact me at 336-849-7908 or at my email hannah_lepsch@ncsu.edu.