Find this article at:
go.ncsu.edu/readext?783246
— Written By Hannah Lepsch

As seen in the Yadkin Valley Magazine, March-April 2021 Issue

Your fall vegetable stores have dwindled, and six months have elapsed since fat tomatoes and zucchini (never thought you’d miss them) proliferated the kitchen counter. Extend your harvest into the early spring “shoulder” season with a cool-season crop like beets. Growing a “shoulder vegetable” is an opportunity to renew fresh harvests before summer crops are even planted.

Garden beets (Beta vulgaris ssp. vulgaris), also called a beetroot or table beet, is a cold hardy biennial (requiring two seasons to set seed) that is grown as an annual for its edible root. It is a member of the amaranth family that includes swiss chard, spinach, and quinoa (and pigweed). Domestication enlarged the upper storage chamber of the root, resulting in the bulbous beetroot that we eat. Beyond its tasty flavor (beets have highest sugar content of any vegetable), several scientific studies have shown that beets help prevent heart disease and lower blood pressure. Beet roots are high vitamin C content to boost the immune system, a pertinent need this spring. 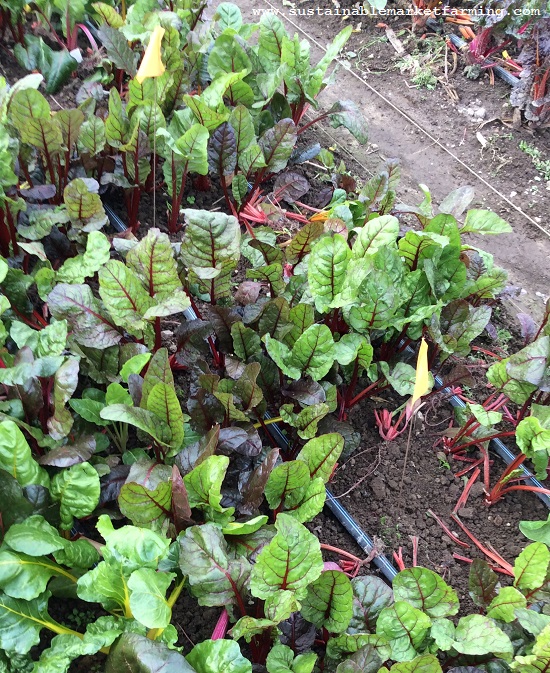 Not only do beets grow best under cool temps, but they’re actually sweeter and have a better color. Like other root vegetables, they are quite cold hardy and survive a freeze and much colder temperatures, 20 F and below, without protection. Varieties include storage, bunching, and specialty types, that range in color from classic “beet red” to gold to red with white stripes. Ruby queen, red ace, and bull’s blood (for greens) are varieties that do well in our area. Lutz and Winterkeeper are excellent varieties for longer storing times that hold for months in the refrigerator. Commonly grown heirlooms are Chioggia, notable for its red and white striped interior, and Cylindra, an elongated, slicing beet that is easy to chop for pickling or on salads.

Planting begins 4 to 6 weeks before the last spring frost – March 1 through mid-April in USDA hardiness zone 7 which is most of the Yadkin Valley. Most varieties mature in 50-60 days for harvest in May to June. Late planting is a frequent problem with beets pushing into hotter weather having underdeveloped, poor quality roots with lower sugar content. Fall beets should be sown 8-10 weeks before killing frost in late July through mid-August. While a fall planting may be sweeter growing into cold weather, plant establishment is more reliable with spring planting because beet seeds do not germinate/survive well in hot soil.

Beets are heavy feeders, requiring adequate nitrogen and phosphorus and loose soil to form a sizeable root. Be sure to apply a nitrogen source in a complete fertilizer or a nitrogen-rich organic amendment like high-quality compost or blood meal. Routine compost application opens up heavy clay soil and over time builds “fluffy” (or friable) soil needed to form a sizeable root. Take a soil test for accurate lime and fertilizer rates for your garden soil. In the absence of a soil test, apply 1 cup of general fertilizer such as 10-10-10 fertilizer per 10 ft. of row. Apply 50% before seeding in a 1-2 ft. wide band, and sidedress plants with the remainder at 4 and 6 weeks after planting. Boron is an important micronutrient for beets, causing a black spot to develop at the root center where deficient. Side dress a small amount (6-7 Tbs of per 1000 sf) of household borax, or even dissolve 1 Tbs of borax in 3 gallons of water and apply with a watering can over a 100 ft. row.

Prepare soil for planting by loosening with a spade, then follow with a rake to form a smooth, even seedbed of fine soil. Direct sow beet seeds ½-1” deep in rows spaced 15-20”, wide enough to keep weeds hoed between rows (beets do not compete well with weeds, so keep up with hand pulling weeds when they emerge). Gently tamp the soil or water in after planting. Beets, like other root crops, are not usually transplanted as disturbing roots during can stunt their growth. Damping-off, caused by pythium spp and other soil-borne fungi, is common in cool, wet soils and shows up as rotting of seedling stems at the soil line. To prevent, grow on a raised bed or planting area to encourage good drainage. 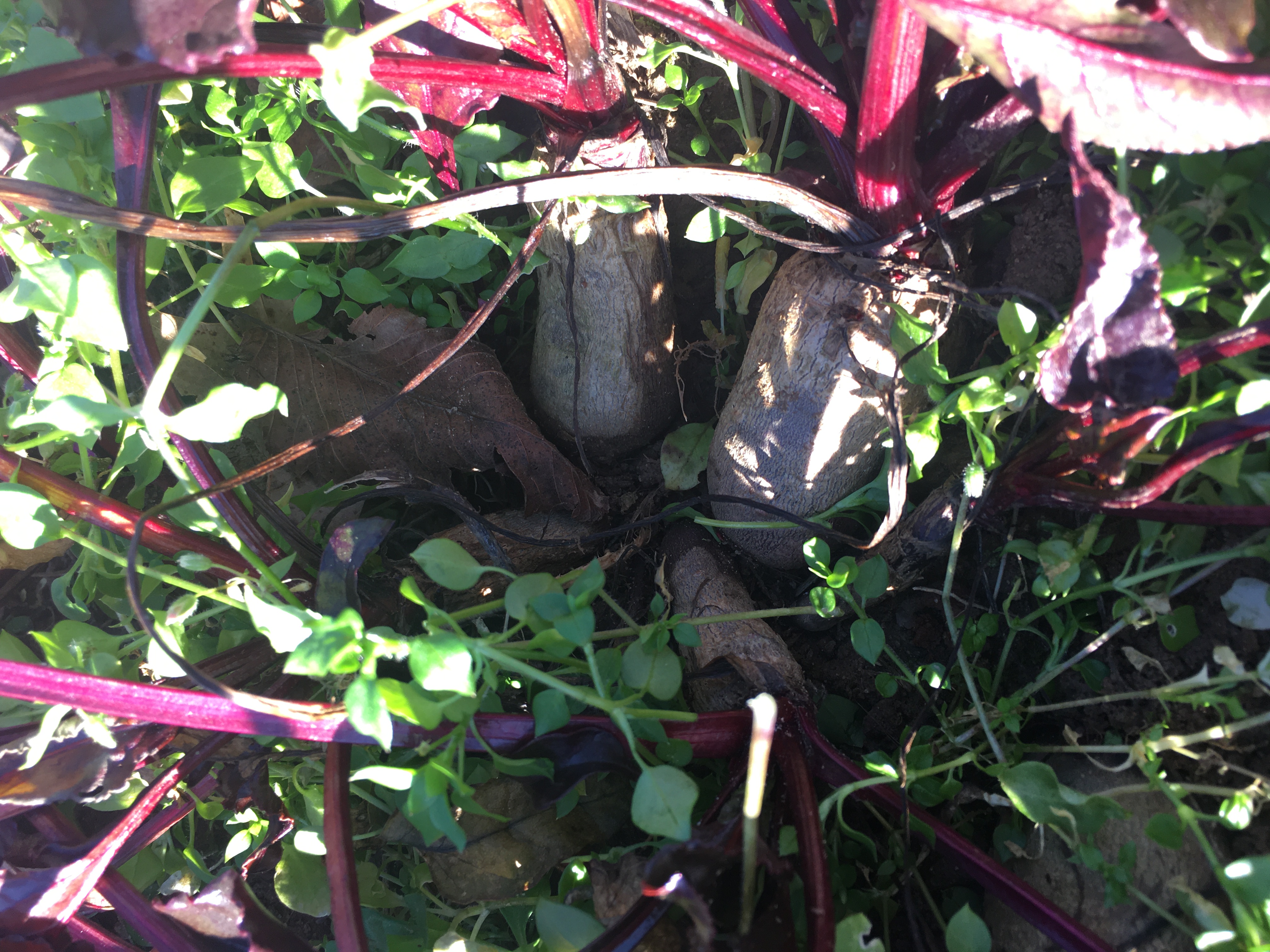 Overcrowding that has lead to poorly developed beetroots. The take-home message, thin ruthlessly!

Careful thinning is critical to get large, well-formed beetroots. I have seen several stunted or malformed beet crops where overcrowding was the likely culprit. The beet “seed” is technically a tiny fruit or seed ball with about 6 individual seeds. When planted, several seedlings will come up together to form a tight cluster. Shortly after germination, reduce the thickest of the clumps to one individual. Thin plants to 3” spacing after the plants have developed true leaves. Or wait until they are a little larger, and thin via destructive harvesting, whereby the harvested plants are also eaten. Eat beet tops or thinnings prepared like other greens such as collards. When very tender, greens can be eaten raw mixed with other salad greens. Their taste is similar to swiss chard but with a distinctive “earthy” flavor.

Consistent watering is also important especially during early establishment and root development. A uniform moisture supply will promote even, non-cracking root expansion. Aim to water deeply to 6” subsoil depth to maintain supply during dry periods and encourage deeper rooting. Straw or hay mulch can be easily spread, maintains soil moisture, and will insulate root tops in the event of a hard freeze.

Harvest by pulling every second beet in the row to give extra space to the remaining plants. When harvesting, break the tops off so the greens don’t regrow and suck nutrients out of the roots. Rinse off dirt before storing. Store in the crisper or fridge for best shelf life. Beets should be good for 2+ months. Plan to wrap up your harvest by the end of June (perfect timing for rotating to a late summer or fall crop). Roots that maturing in hot weather (above 80-85 F) become woody, fibrous, and small. Timely planting so you can harvest prior to the onset of summer heat is key growing high-quality and sweet beets.

For those who have more questions please contact N.C. Cooperative Extension – Yadkin County Center at 336.849.7908 or by email at hannah_lepsch@ncsu.edu.